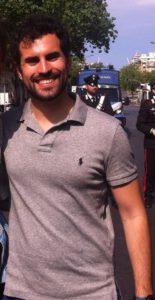 I am Salvatore Orlando. I was born and raised in Palermo. There, I studied Law and am finishing a Phd in Criminal Law. I have always been interested in increasing my knowledge about the world out there, beyond my backyard. During my university years, I enjoyed the opportunity to study abroad in Europe and I was able to spend several long periods in a German Universities: the University of Freiburg and the University of Göttingen. Then, after spending some time in Oxford as academic visitor, I have formed a clear idea about going to the USA to gain deeper insight into American society and conduct my doctoral research.

The Fulbright-Falcone-NIAF grant was surprisingly and perfectly designed for my objectives. It puts together extraordinary examples from my city, the legacy of the Italian-Americans and the prestige and importance of the Fulbright Commission. So, I could not miss this unique opportunity.

One of the most important legacy of Giovanni Falcone was his investigative method based on “follow the money”. He inspired me to find out more and, in some way, give my contribution in the fight against Mafia. So, I decided to make this interest the object of my Phd research and I moved to US to study the crime of money laundering. Accordingly, I conducted a comparative work between Europe and US on the way in which the different criminal Justice systems cope with the issue of money laundering. I had the opportunity to interview former prosecutors of the Department of Justice and employees of important financial institutions. As a visiting scholar at the Law School of the University of Virginia, under the supervision of Prof. Brandon Garrett, I engaged with many lawyers and legal scholars and I attended some federal trials. So, I could have a vital exposure to the American criminal justice system. Eventually, I could write down a comparative review of money laundering, which, I hope, will help better understand the underlying legal differences in the global fight against money laundering and organized crime.

Living in US has amazingly broadened my horizons and led me to challenge concepts that I had previously held to be immutable. I had a dual affiliation – University of Maryland in the Fall  and University of Virginia in the Spring semester–  which gave me the invaluable opportunity to better grasp various nuances of US society and University. I could join the Barristers’ soccer team and had the opportunity to travel to New York, New Orleans and Denver. But I still know there is much more to explore!

This experience means a lot for my carrier. I realized how important is the mutual understanding and the importance of a better collaboration between judicial Authorities. So, in my capacity as a legal scholar and a lawyer, I will give my contribution in advocating a stronger collaboration between Italy and US in the fight against organized crime.