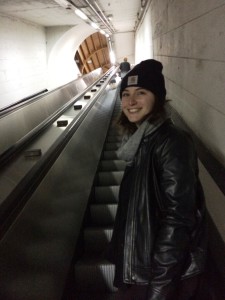 Fulbright Commission:  Hi Sarah! What brought you to your city/university/school in Italy? How long have you been here?

Sarah: I love learning languages, and I studied Italian in high school. I’m hoping to become an elementary school teacher in the future, and I’m passionate about using education as a tool for pursuing social justice and cultural inclusiveness. I applied to the Fulbright program so I could combine my interests in education, culture, and languages. It’s been a tremendous learning experience so far – both teaching English in the classroom and learning Italian outside of it! I’ve been here since the beginning of October, so about two months so far.

Had you ever been in the South of Italy before?

No, never! I’d visited Italy twice in high school, on trips through my high school’s language program, but we spent the trips exploring Tuscany and Northern Italy – before I arrived in Potenza, I had never been further south than Florence.

It’s definitely been a steep learning curve so far – living in a city without many other foreigners, I’ve had to figure out a lot of things on my own, from how to get to the immigration office to how to find an apartment to how to use an Italian coffee machine. But I’m really lucky to be surrounded by generous and welcoming people (especially the students I work with) here in Potenza! They’ve made it a wonderful experience so far and I’m so excited about the months to come.

What’s one thing that may have surprised you about the habits and customs of the Italians you’ve come in contact with?

This isn’t exactly a habit or a custom, but it is one thing that has surprised me about living in Potenza. Potenza is home to the longest system of public escalators in Europe – because the city is basically vertical, there is over a kilometer of (mostly) underground escalators connecting the lower parts of the city to the higher parts. There’s one set of escalators that basically makes a huge bridge from one side of the valley to the other side, and I’ve really never seen anything like it! On a different note, I’ve been really impressed with my students’ commitment to activism. Right now, there’s a big controversy in Basilicata over drilling for oil in the region. My students have gone on strike several times over the past few weeks to protest drilling in Basilicata, and today I actually went to the protest for the first time. Seeing them fight for their future is really inspiring, and reminds me why I decided to apply for a Fulbright in the first place.