Maggie Neil and Leanne Tory-Murphy were awarded a grant to conduct research on Migration in Palermo, Sicily in the a-y- 2016/2017.  After spending several months there, we asked them to share an insight on their #Fulbright experience.

1. Could you please tell us why you chose to participate in the Fulbright Program? What were the main factors which led you to choose Fulbright instead of other cultural exchange programs? 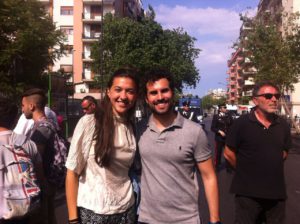 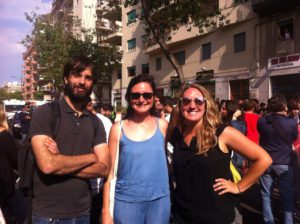 Maggie Neil (MN): I knew that I wanted to spend a year living in Sicily, researching what was really happening on the ground, as people continued to disembark on its shores in boats from Libya and elsewhere. I wanted something with enough structure that I could be rigorous in my studies, and be taken seriously in my project, but with enough freedom  to explore, to pivot in my ideas if that seemed necessary, and to come up with my own, original project. Fulbright is the only exchange program that I know of that allows for something similar.

Leanne Tory-Murphy (LT-M): I decided to participate in the Fulbright Program because of the autonomy and independence it offers to pursue one’s research goals and interests.  The freedom afforded by the Fulbright allowed me to fully immerse myself in my field and develop a strong network of people doing related work.

(MN): I work in Palermo looking, speaking broadly, at themes of migration and human trafficking. Over the course of my nine months, I’ve changed my focus—first I was looking at issues surrounding the Italian system of housing asylum-seekers, which is riddled with problems, from corruption to lengthy bureaucratic processes that mean that people who arrive in Italy are often parked in a structure for years before they can start their life in Italy. As I went deeper and deeper into my research, I realized there was a gendered dimension to this issue—a large percentage of women arriving in Italy are trafficked or are at risk of falling into criminal networks that would force them into prostitution. So I’ve mostly ended up focusing on the different projects and philosophies geared towards women who arrive and end up working on the street. Some of my guiding questions are: do the current initiatives already in place adequately suit the needs of these women? How might attitudes about religion, race and gender manifest in policies surrounding trafficking and prostitution? Are some routes more efficient than others at integrating these women? 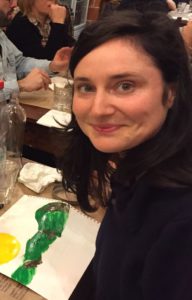 (LT-M): I studied contemporary issues in Mediterranean migration, with a focus on the legal aspects, with the guidance of Professor Daniela Ciaffi at the Universitá degli studi di Palermo in Sicily. Living and working in the port city of Palermo, a primary arrival point for Africans and others coming by boat, gave me broad exposure to many different aspects of the migration phenomenon in Italy, including the formal and informal reception systems, legal processes, access to healthcare and education, and the broader cultural, social, political and economic processes of integration and inclusion. Throughout my time, I volunteered with a legal clinic for asylum seekers. As a participant-observer I completed an ethnography about the place and project called “The Struggle for Inclusion: A Case Study of the Sportello Sans Papiers” which offers critiques of the concepts of accoglienza and integrazione that drive the current migration discourse as well as a distinct model for migrant empowerment through a combination of service-provision, community building and political organizing.

3. Why did you chose Palermo? 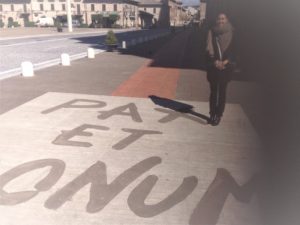 (MN): I chose Palermo because of the primacy and specificity of its place in an international phenomenon. Palermo, and more generally Sicily, of which Palermo is the capital, is the point of first arrival for many of the individuals arriving from Africa, as well as the Middle East and even Asia (less well known is that a good number of Bangladeshis also arrive to Europe by taking the boat from Libya to Sicily). In Palermo, the discourse is different from northern Europe or even northern Italy, where the talk revolves around economic integration. Here, it’s about getting papers, getting documented, and dealing with all the things that might be shocking to a person who just arrived in a new place.  Palermo is also an amazing city to do on the ground research–it’s all happening here.

(LT-M): I chose Palermo for it’s unique migration history and because it is one of the primary points of arrival to Europe for migrants today. The capital of the Sicily, it has become a significant hub for immigrant life and is home to people from Nigeria, the Gambia, Romania, the Philippines, Senegal, Morocco, Tunisia, Bangladesh and elsewhere.

Fleeing unemployment, poverty, corruption, violence and political strife in their home countries many immigrants in Sicily cross the Mediterranean by way of Libya often in unseaworthy watercraft and in the care of unscrupulous smugglers.  Immigrant communities in Sicily are also particularly vulnerable to labor and sex trafficking due to pervasive organized crime networks, their immigration status and lack of legal employment opportunities. 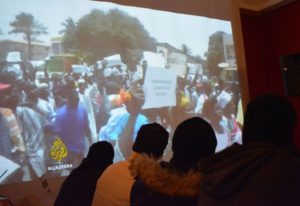 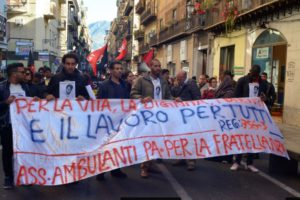 March for the “permesso di soggiorno” in Palermo. Courtesy of Leanne Tory-Murphy.

4. Could you tell us how your Fulbright experience helped you to reach your professional and personal goals? 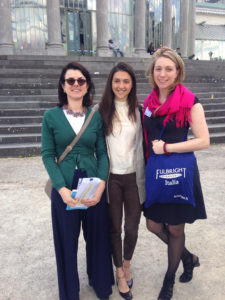 Maggie in Brussels during the EU – US young leaders seminar 2017 on #migration. On her left, Executive Director Paola Sartorio, on her right Alumna Lydia Witt.

(MN): The former US ambassador to the UN, Samantha Power, said that if you want to know something, get close to it. I wanted to know what the so-called “migration crisis” (a phrase I don’t like to use) was all about, and the Fulbright made that possible. It gave me an on-the-ground view that many people, including people working in migration policy today, simply don’t have. That’s incredibly enriching. I’ll be going to Oxford next year to pursue a master’s on the subject, and I know that my experiences during the Fulbright were not only invaluable to gaining acceptance in the program, but will continue to be throughout my course of study. Just as importantly, I think, the Fulbright gives you time and space to do what you want. For me, that meant spinning my experiences into articles and blog posts. It’s given me time to write.

(LT-M): The Fulbright experience contributed to both my professional and personal goals by offering both access to a range of experiences and opportunities as well as time for reflecting, reading, writing and publishing. As a result of being uniquely positioned to both fully immerse myself in the day-to-day work that accompanies this particular situation, as well as to familiarize myself with the literature and research that has been written, I was able to develop an expertise and a role from which to contribute within a short period of time. As a result of the work I have done during the Fulbright I have been able to publish in various journalistic outlets, as well as with an academic journal. I will continue to do research and write this upcoming year as a Global Journalism Fellow at the Munk School for Global Affairs at the University of Toronto. 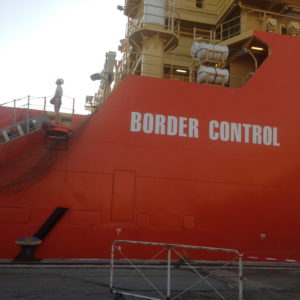 Rescue boat landing at the port. Courtesy of Leanne Tory-Murphy. 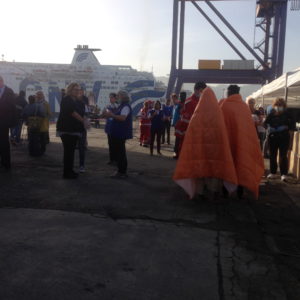 Visiting the Cara of Mineo was one of the most memorable experiences of a year full of them. It’s the largest official housing structure for asylum-seekers in Europe; at one point it housed over 4000 people. The place is overcrowded but it’s huge. It was originally built to house American marines working at Sigonella, the military base. So it’s a strange place—it almost looks like a small American suburb, built in the middle of a barren Sicilian landscape, now housing thousands of asylum-seekers from Africa, the Middle East and Asia.

It’s become increasingly difficult to visit the Cara, which is part of why it was an important experience for us. (The Fulbright commission in Italy was actually instrumental in granting us access, which we are very appreciative of.) In the past few years, there’s been criticism and investigations of the Cara, into corruption and mafia behavior, into the way the people are treated (lack of medical attention, being given cigarettes instead of payment, inadequate legal resources for the high volume of users, etc). There was a suicide a few years ago, too, which led to protests from the users of the center. So the management has closed it to visitors except with permission, and even then, you get a guided tour of the place, so most of it is actually off limits.

We knew this going in, and so were prepared to be as observant as possible and take advantage of what we were allowed to see. We realized that Cara is located miles away from the nearest town, which means that the people living inside are isolated. To put it succinctly, there are many ways the system could improve. 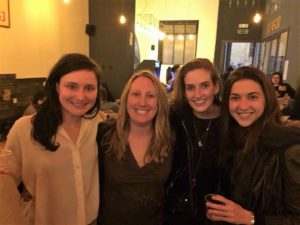 (LT-M):  For me, the Fulbright Program has been about autonomy, observation and expression.