BIOGRAPHY: An architect and engineer by training, Carlo Ratti practices in Italy and teaches at the Massachusetts Institute of Technology, where he directs the Senseable City Lab. He graduated from the Politecnico di Torino and the École Nationale des Ponts et Chaussées in Paris, and later earned his MPhil and PhD at the University of Cambridge, UK.  In 2001 he was Fulbright Visiting Scholar to the Massachusetts Institute of Technology.

Carlo holds several patents and has co-authored over 250 publications. As well as being a regular contributor to the architecture magazine Domus and the Italian newspaper Il Sole 24 Ore, he has written for the BBC, La Stampa, Scientific American and The New York Times. His work has been exhibited worldwide at venues such as the Venice Biennale, the Design Museum Barcelona, the Science Museum in London, GAFTA in San Francisco, MoMA in New York and MAXXI in Rome.

Carlo has been featured in Esquire Magazine’s ‘2008 Best & Brightest’ list and in Thames & Hudson’s selection of ‘60 innovators’ shaping our creative future. In 2010 Blueprint Magazine included him as one of the ‘25 People Who Will Change the World of Design’, Forbes listed him as one of the ‘Names You Need To Know’ in 2011 and Fast Company named him as one of the ’50 Most Influential Designers in America’. He was also featured in Wired Magazine’s ‘Smart List 2012: 50 people who will change the world’. At the 2008 World Expo, his Digital Water Pavilion was hailed by TIME Magazine as one of the ‘Best Inventions of the Year’. In 2011, Carlo was awarded the Renzo Piano Foundation prize for ‘New Talents in Architecture’. Carlo has been a presenter at TED (in 2011), program director at the Strelka Institute for Media, Architecture and Design in Moscow, curator of the ‘2012 BMW Guggenheim Pavilion’ in Berlin, and was named ‘Inaugural Innovator in Residence’ by the Queensland Government.

The Italian Minister of Culture also named Carlo as a member of the Italian Design Council – an advisory board to the Italian Government that includes 25 leaders of design in Italy. He is currently serving as a member of the World Economic Forum ‘Global Agenda Council for Urban Management’ and is curator of the ‘Future Food District’ pavilion for the 2015 World Expo in Milan. 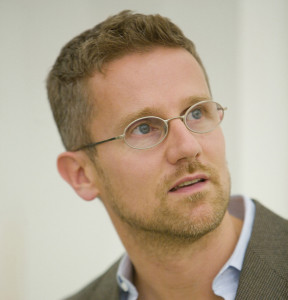 1- Fulbright Commission: Professor Ratti could you please tell us why in 2000 you decided to continue your research activities in the U.S? Could you also tell us why you chose the Fulbright Program to support this decision?

At the time I was about to finish my PhD at the University of Cambridge. Bill Mitchell, who was then the Dean of the School of Architecture and Planning at MIT, attended one of my public presentations and invited me to spend some time in the USA to continue my research. We decided together to apply to the Fulbright Program. I had already heard a lot about it as my dad had been a Fulbrighter when he did his own PhD. Also, Umberto Eco – who wrote one of my recommendation letters for the Commission and with whom I was working at the time – was himself an alumnus. Retrospectively, I can now say that it was a great decision: the Fulbright is probably the best way to land at a US university.

2- In 2000 you came to the MIT Media Lab to carry out your research activities.  Could you tell us something about your project?

Of course! I started working with Hiroshi Ishii at the MIT Media Lab. His group was called Tangible Media and he was passionate about the convergence of bits and atoms in our everyday life. I started looking at the same topic at the scale of the built environment.

That initial endeavour led me to the creation of my own research group at MIT a few years later – the Senseable City Lab. New technologies were promising exciting transformations in communication, transportation and fabrication. We tried to imagine how these developments could impact design and how the unprecedented convergence of digital and physical layers would affect the way we understand, design and ultimately live in cities.

3- When you recall your stay in the U.S. what is the first image that comes up to your mind?

Windsurfing! Summer in Boston is the best time of the year. I would spend most of the day and night working at MIT, but on and off run to the sailing pavilion to have a mind- and body-refreshing break in the gusts of water and wind.

4- Could you tell us how your Fulbright experience helped you to reach your professional and personal goals?

The Fulbright fellowship allowed me to go to MIT – something which had a major impact on my subsequent carrier.

5-Could you please tell us something about your project “Future Food District” that has been developed in occasion of EXPO 2015? From your perspective how could technology interact with the food industry in order to improve the environmental sustainability?

The district is the Expo 2015’s thematic pavilion focused on innovation. Again, we started our investigation at the convergence of the digital and physical world.

We want to explore how the food chain is evolving and how new technologies can allow us to have a more direct interactions with food. In particular we had to design a real supermarket, in collaboration with leading Italian retailer COOP. We started from the idea that products can tell us their stories. An image that I always liked is that of Italo Calvino’s Mr Palomar who, immersed in a Parisian fromagerie, has the impression of being in a museum or in an encyclopedia. Calvino writes: “This shop is a museum: Mr. Palomar, visiting it, feels as he does in the Louvre, behind every displayed object the presence of the civilization that has given it form and takes form from it.”

Products are displayed on large tables, avoiding the vertical barriers of traditional aisles. By simply touching or pointing to the products, the customer can obtain augmented information about it – that is, all the data available today on the net which does not fit on a traditional-sized label. Through these “augmented labels” products are able to communicate their properties, transformations, paths – in short to tell us their stories as in Calvino’s book.

6- From your perspective do you think that the academic exchanges and the Fulbright Program are still useful means which help to address contemporary issues?

Today, academic exchanges are more important than ever – as a way to accelerate the production and transfer of knowledge across the world. The Fulbright exchange is probably the “voie royale” to enter US academia. I should like to add that travelling itself – for me – is one of the best ways to learn and generate ideas. I like to live on the road. As Tiziano Terzani wrote: “If I have time for reflection at the end, I would like to be able to say, ‘I have traveled.’ And if I have a grave, I would like a stone with a hollow from which birds can drink, inscribed with my name, the two obligatory dates, and the word, ‘Traveler.'”